hide
hide
No announcements have been posted yet for Team Chicago Academy-1998 Elite.

Palmeiras Off to a Great Start in State Cup!

Team Chicago Academy-Palmeiras got off to a great start in the IYSA State Cup with a stunning 8-0 victory over Tinley Park Bobcats in their first game of round robin play.

The opening goal came off a cross connecting with Victor Cuevas in the 15th minute of the first half. Max Graf tallied the second goal beating the Tinley Park goalie from 20 yards out. The third goal came off of a perfectly executed counter attack play led by Victor Cuevas, who found Aayush who calmly finished the play to give Palmeiras a 3-0 lead going into halftime.

There was no slowing down as the second half featured even more scoring. Dominic Duffy collected a brace inside 15 minutes after finding himself on the end of two great crosses by Bryan Lobkovich. Bryan would then add to the scoring himself when he beat the Tinley Park goalie with a great shot in the far upper corner from the corner of the 18-yard box. Emerson Beinhauer converted a penalty kick and Aayush slotted home his second of the game to round out the scoring. Brady Moody picked up the shutout in goal.

This weekend Palmeiras turns its focus to MRL play in Rockford. 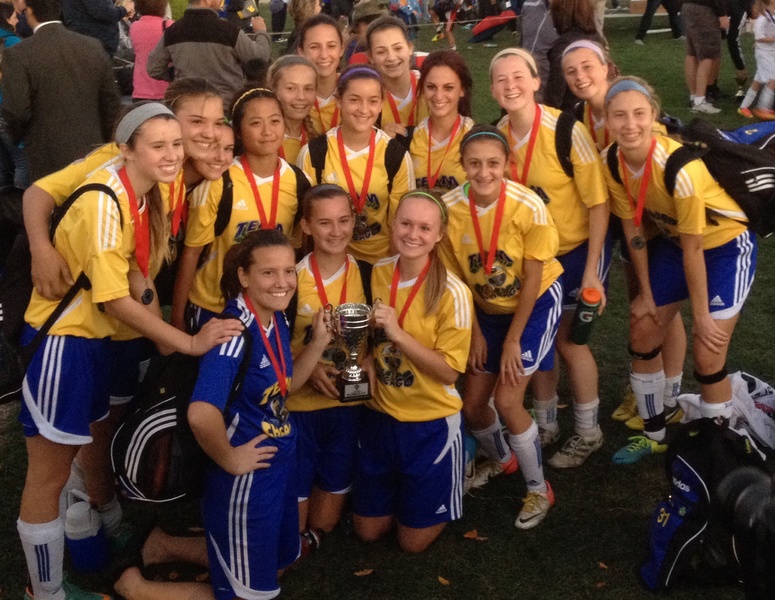 The U16 girls started off their weekend with an 8-0 shutout win over Campton United on Friday night. Saturday and Sunday proved tough competition from a Wisconsin team and a Michigan team followed by State Cup semi finalists, Michigan’s Vardar East, in the finals. This new team enjoyed their accomplishment with Coach Joe Moreau.

Vasco Opens with a Shutout!

Team Chicago Academy- Vasco played Kickers SC from Aurora on Sunday afternoon and took the lead in the first half 1-0 with a great left footed goal by Madie Sandberg. In the second half, the girls continued to dominate the opposing team with 2 more goals by Madie and Stephanie Kenyon. The harsh 15 mph winds at Play USA didn’t even phase the girls as they shut out the Kickers. The passing and defense helped seal the shutout. What a way to start the season!!!

Welcome to your New TeamPage

Welcome to the Team Chicago Academy – Cosmos Website! Here is where you can post and find your team schedules, news, scores, photos, documents, and message boards. It should make it easier to know what’s going on with the team.

So check it out and give it a try. If you have any questions email TeamPages support at support@teampages.com